Oh my, how fast a year has flown by and my how much has changed! Last year, in February, I came to the realization that if I really wanted to increase my knowledge and advance my career, then I needed to invest in a homelab. So, I made an investment and purchased a SuperMicro 5028D-TN4T system bundle from WiredZone. It has been a year since I did my initial review of this system and since then I have made good use out of it and decided to come back with my thoughts.

With the WiredZone bundle I got:

During my order I went ahead and added the additional 64GB of RAM to bring the system to its max RAM capacity of 128GB. This system has the ability to add 6 HDDs and two other storage options by means of a PCIe and M.2 slot on the motherboard. So initially I started with two 500GB SanDisk SSD drives

Since I purchased it I’ve added a 1TB 7K WD drive and another 500GB SanDisk SSD into two of the 4 hot swappable slots on the front of the server. They make an adapter that will allow you to fit a 2.5 HDD into the 3.5 HDD slot. That’s what I used for my latest SSD drive in the front. So not much has changed for me from a hardware perspective. I did however run into Paul Braren at VMWorld 2017 and he gave me some nice labels for the the ports on the back of the server

And for the front door of the server

Now as far as what products I am running….I was about to fit the ones that mattered most to me, NSX and vRealize Automation. I also have a few other products running like, vRealize Log Insight, vRealize Operations Manager, Veeam Backup & Recovery, Veeam Powered Network….this one is great by the way for remotely accessing my lab, and I have a couple VCSAs and NSX managers and several nested ESXi hosts. I’ve pretty much maxed out my 128GB of RAM. There are cases where I shut things down to free up resources for other things but, for the most part, I can run everything at the same time.

I have two vCenters setup in linked mode, with each of them having 3 ESXi hosts. Here’s a quick snapshot of both vCenters: 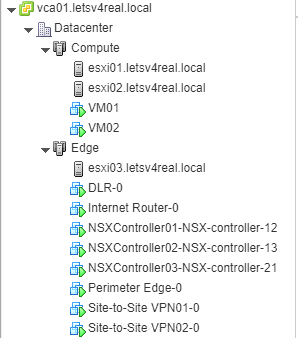 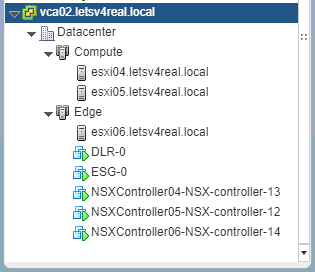 Even with the SuperMicro server being pushed to its max on resources, it still remains a very quiet server. Even when I’m right next to it, I have to try hard to make myself hear it….its that quiet. So I have no complaints about the noise level. As far as power consumption this past year with it…I didn’t notice any change to my energy bill. So it has proved true to be a quiet, energy efficient server. Another thing that I wanted in a homelab server was a small form factor. Now this server is not as small as a Intel NUC or one of the SuperMicro SYS-E200-8D servers but its smaller than a standard size desktop tower. I like to compare it to the size of the old Nintendo GameCube….just a little taller. Another thing that I’ve come to appreciate is that everything is all in one. What I mean is…I have my compute, storage, and networking all in one system. Running things nested has prevented me from having to go and spend money on extra networking equipment. I’ve been able to manipulate things using NSX to mimic what it would be like to have a multi-site data center. Now of course it’s not the exact same, but for certain concepts that I wanted to test, it’s been sufficient.

To round things up, I can say I’m very satisfied with my purchase. I don’t have any regrets in my purchase and at least from a storage standpoint, I still have room to grow. The system has been very reliable. I have not had a single hardware issue or any quirkiness from the system. Everything has worked as expected. The system runs 24/7 at home and is only powered off when performing updates to it. The only thing I wish I could change about this system…is have it support 256GB of RAM. But I’m sure at some point I’d run through that and wish it would support 512GB of RAM. In the future I may add another system similar to this one to expand my lab, but for right now this SuperMicro system is serving it’s purpose. I’ve been able to study for and pass certification exams. I’ve been able to create and share…what I hope is…useful technical content with others. And one the best things about having my own home lab is I don’t have to start over each time I have to stop working on something…I can pick up right where I left off. (Speaking on VMware HOL).

I would highly recommend this setup to anyone that is looking for a reliable system that powerful, can grow with them, is energy efficient, and that has a small form factor.